Annotations in an 1818 Military Levying Roll

The military levying roll entry for Ole Mogensen in the 1818 main roll is full of annotations.2 Distinguishing one annotation from another required meticulous transcription of the entry and an examination of the surrounding entries to determine which annotations belonged to which entry. Only thereafter could the entry be translated. 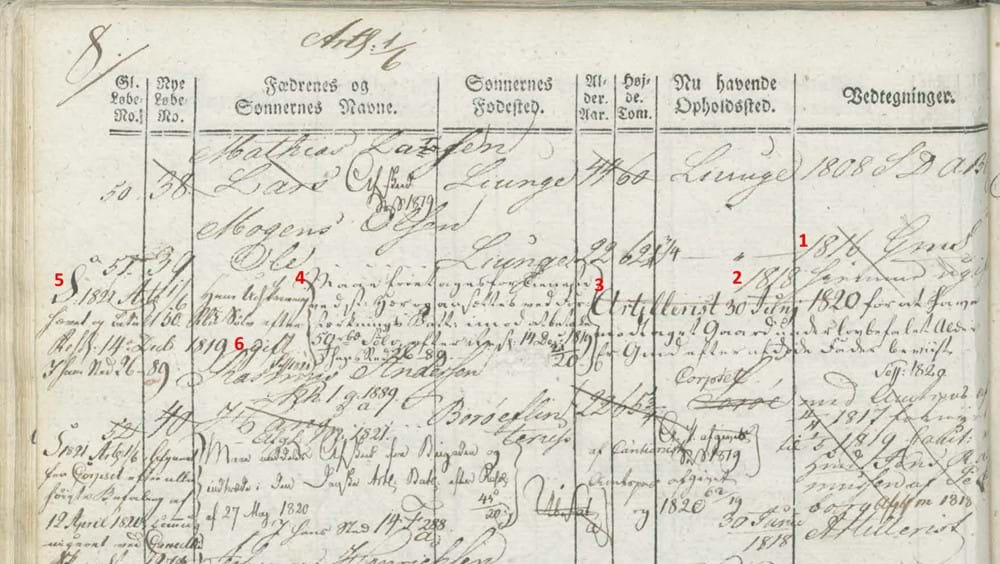 The numbers in the list of the annotations below refer to the numbers inserted in red in the image above. This demonstrates that annotations were not always written in a logical order on the page, but typically began in the last column and were written elsewhere if more space was needed.

The annotations mean that Ole Mogensen had taken over a farm before he had reached the age required by the law. The required age was 28 years. If the father had died, the oldest son could take over the farm or house before reaching the age of 28.3 The first annotation implies that Ole had acquired a farm by the 1816 session, when he was about 21 years old. Correlated with the law, the annotations imply that Ole’s father had not died by the 1816 session.

It was decided that Ole was to be conscripted to the artillery from 30 June 1820 because of his offense. However, he provided evidence for his father’s death at the 1820 session. On 14 December 1819, it was resolved that Ole could be exempt from service if he paid 50 rigsbankdaler. By the 1821 session, Ole had paid and was exempt from service. At the same time, it was noted that he was now married.

The military had to consist of a certain number of soldiers, so someone else had to take Ole’s place. That someone was "26_89," meaning the man listed under entry 89 in lægd 26.

When looking only at the details in yesterday’s post about the 1836 entry for Ole, it appeared that he had acquired the property about 1820. The details in the 1818 entry suggests that he had already acquired a farm by 1816. That shows the importance of examining all entries for a person in the military levying rolls.

In addition to the steps mentioned in yesterday’s post, my next research steps include: