From 1683 until 1851, marriage in a church was the only legal method of getting married in Denmark. A marriage record from this period is therefore found in the church records, also called parish registers. Since 1851, civil marriage has been an option for Danes. For family researchers this means more sources to search. I was married in a church eight years ago today. I am celebrating my anniversary with this introduction to Danish marriage records from three centuries.

Engagement and Marriage Record from 1783 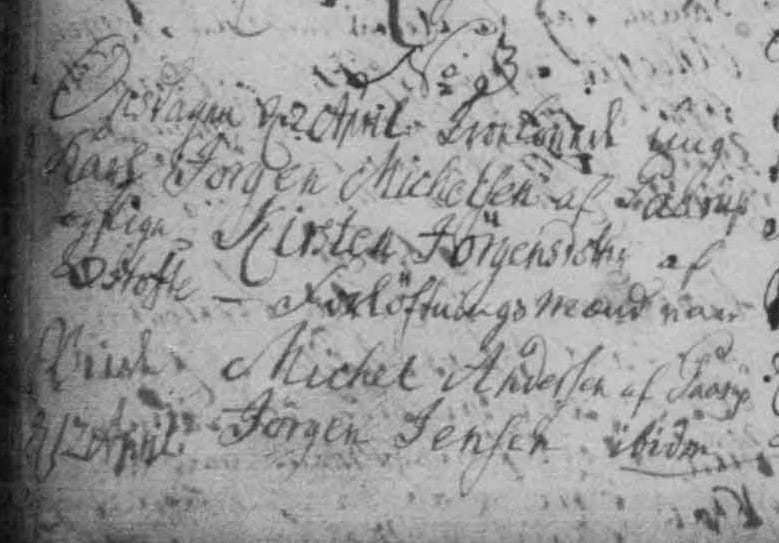 My husband's sixth great-grandparents bachelor "Jörgen Michelsen" from Paarup and maiden "Kirsten Jörgensdatter" from Østofte were betrothed on Wednesday 2 April 1783 and married on 12 April 1783. Their sponsors were "Michel Andersen" and "Jörgen Jensen," both from Paarup. This marriage record is typical from that time. The focus is on the betrothal, rather than the marriage. A betrothal is a formal engagement. Betrothal was required to be married and it was also binding. Some marriage registers do not list the marriage date, because it was not particularly important as long as the betrothal had been documented.

Danish church records date back to the 1700s for most parishes. You can see the records online at AO genvej. You need to know the name of the county (amt), hundred (herred) and parish (sogn) to be able to find the record. Jørgen and Kirsten were married in Østofte Sogn, Fuglse Herred, Maribo Amt. The full image with their marriage record can be seen here: ao.salldata.dk/vis1.php?bsid=159413&side=300

The names of the sponsors should be noted, because they were most often the fathers of the bride and groom. My research has shown that Jørgen Michelsen's father was Michel Andersen and Kirsten Jørgensdatter's father was Jørgen Jensen. If you are surprised to see that the bride and groom do not have the same surname as their fathers, you might benefit from reading my blog post about Danish naming customs. 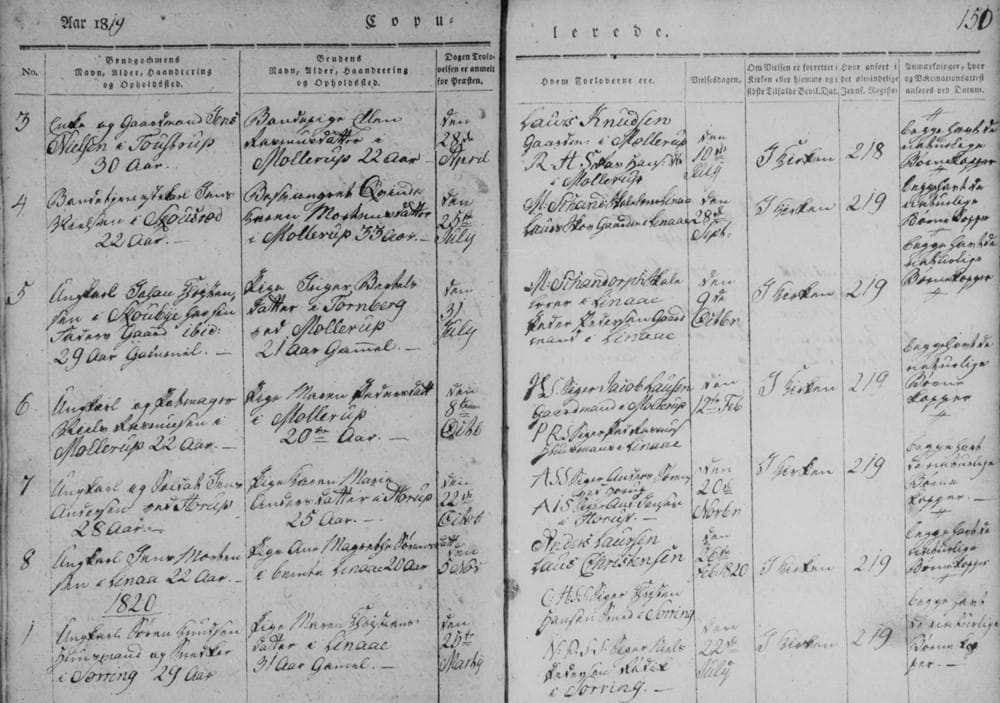 From 1814, Danish church records were kept in books with preprinted columns and headings. This generally makes it easier to find a specific record. My fifth great-grandparents are listed under entry 8 in 1819. They were betrothed on 5 November 1819 and married on 26 February 1820, so beware that registers containing a column for betrothal dates are arranged by betrothal dates and not marriage dates. "Jens Mortensen" and "Ane Margrethe Sórensdatter" were married in Linå Sogn, Gjern Herred, Skanderborg Amt. The image can be seen at AO genvej:  http://ao.salldata.dk/vis1.php?bsid=166231&side=115

The required contents of the church books vary over time. This early record may not seem particularly informative, however, it states the age of the bride and groom, which the record from 1783 does not. The age may be off by a couple of years, so always correlate the information with information from other sources. Jens and Ane Margrethe were listed as a couple in the 1834, 1840, 1845, 1850 and 1855 censuses, so plenty of information is available for trying to find their birth records. The more recent a marriage records is, the more information it usually provides. 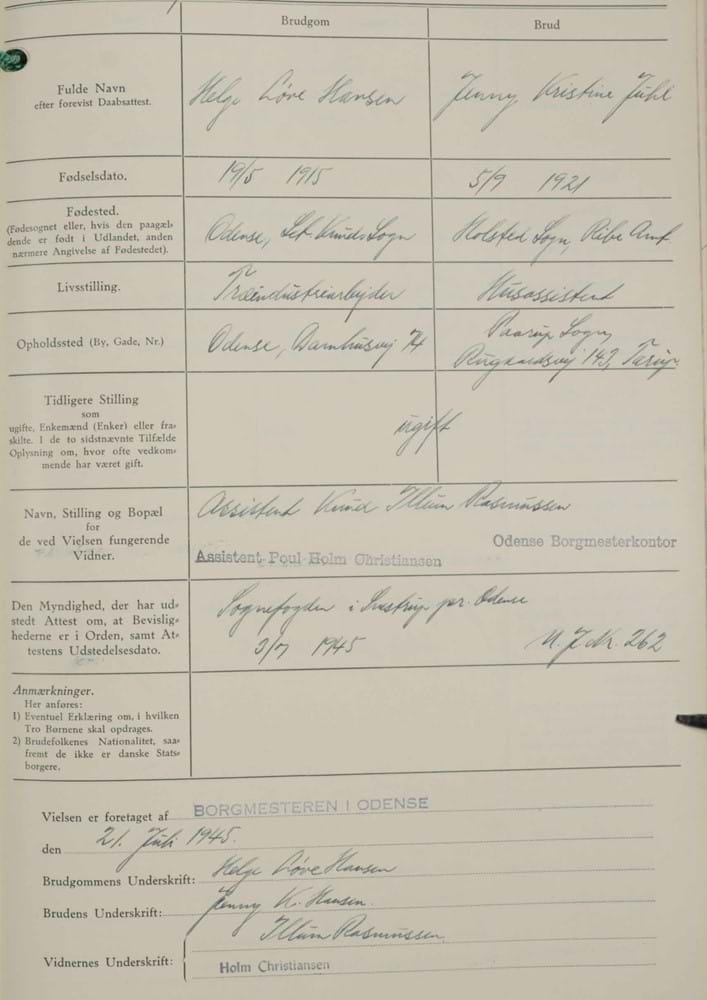 This civil marriage record states the birth dates and places of the groom and bride, making it easy to locate their birth records. A civil marriage often took place, when the bride was pregnant and the marriage had to be done without drawing too much attention. The firstborn child of Helge and Jenny, my aunt Birte, was born four days after their wedding, so it was a close call for them. Having a child out of wedlock was ill-seen, but as long as the couple was married before the birth, it was quickly forgiven and forgotten.

Can You See My Marriage Record Online?

No, you cannot see my marriage record online and probably not offline either.

Marriage records from all Danish parishes can be seen without special permission when the record is from before 1925. Most marriage records from 1925 to 1961 have been scanned and most of them can be accessed online, free of charge. However, records from 1925 and younger may contain civil registration numbers, so the records are being checked to ensure that this information is not visible on the images, before they are made available online. Furthermore, only records handed over to the Danish National Archives from the churches have been scanned.

Marriage records which are not available online, can be accessed offline at the Danish National Archives, if the record is more than 50 years old. It requires special permission, but the permission is given immediately. Records younger than 50 years can also be accessed offline, but a written application must be sent to the Danish National Archives or the church holding the records. Access to these records usually requires that the couple is deceased and that there is a documented relationship between the applicant and the couple. Offline records can be accessed by a professional researcher, if access is granted to the applicant, and if there is a power of attorney between the applicant and the researcher.

I hope this post can assist you in your search for Danish marriage records.

What does Quasimodo Geniti mean?

What does the Danish word opholdsbog mean?

What does the Danish word mandtal mean?