Going Abroad: When Did Your Danish Ancestor Emigrate? 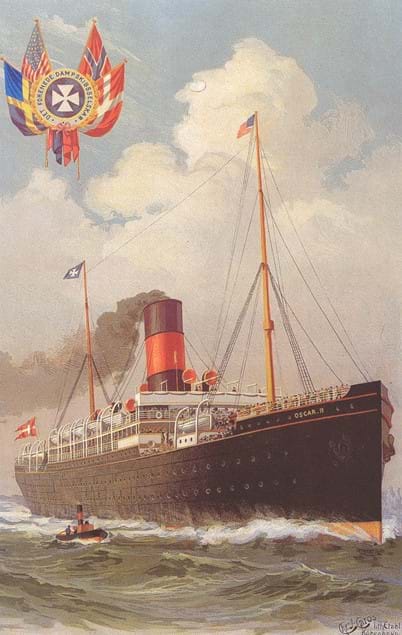 An immigrant was also an emigrant, so in this post I will show you where you can find Danish emigration records. Where there is money to be gained, there are scammers. This was also the case with sales of tickets to adventurous Danes, who intended to go abroad. To minimize the risk of Danes being scammed, the Danish government passed a law on 1 May 1868, by which all ticket sales by agents in Denmark to overseas destinations had to be approved by the Copenhagen Police. The police recorded details from the tickets into emigration record books. These books have been kept and records from 1868 to 1913 have been indexed.

Emigration Records from the Copenhagen Police

My great-grandmother's brother Rudolf Lambert Söderlund emigrated in 1906.1 I found him in the index of the Danish emigration records at http://www.udvandrerarkivet.dk/soegeside. It is not possible to make a deep link to a search result, so be sure to cite identified records with as many details as needed.

To the far right of each search result is a up-and-down arrow. If you click it, you can see the name of the ship, if it was recorded. Rudolf had a ticket to the SS Oscar II. Many Danes traveled via German or British ports, which was called an indirekte (indirect) passage. In that case, the name of the ship was not recorded, and you will see a ship icon and the word indirekte instead of the name of the ship - as shown in the example with Magnus Nielsen below.2

The original records have been transcribed in full, so you will not find more information by obtaining a copy of the original record. However, we all know that transcription errors do occur, so it is advisable to obtain a copy anyways. The Danish Emigration Archive offers outstanding service. They send a digital image of the record to you free of charge as long as they can find it within half an hour. If you have identified the record in the index, the archive can quickly find the page based on the information in the index. If your ancestor left after 1913 (which is the last year indexed to date), but you know his or her Danish name and the year of departure, they can almost always look for your ancestor within half an hour, because the original books are sorted by year and passenger name. A snippet of the page showing Magnus Nielsen's original record is shown below to give you an idea of what to expect, if you order the original.

These emigration records from the Copenhagen Police do not contain all Danish emigrants. If the ticket was bought by a foreign agent, the agent did not have to have the ticket sale approved, and then the passenger is not listed in these records. Furthermore, separate lists of Mormon emigrants were kept from 1873 to 1894 and these records have not been indexed, yet. They can be accessed at the Danish Emigration Archives.

Emigration Records from the Mouritzen Brothers in Vejle

Although Denmark is a small country, the need for an authority to approve tickets in the western part of Denmark quickly arose. The Mouritzen brothers in Vejle were authorized emigration agents for the Hamburg-America Line from 1879 to 1897. The passengers in their lists are not in the lists of the Copenhagen Police. The lists are called Vejle-listerne and they have also been indexed.

Vejle-listerne do not list place of birth, but only residence at the time of the ticket purchase. The original records are kept at the Viborg department of the Danish National Archives.

I have identified many Danish emigrants for their descendants in the United States, Canada and Australia. If you need professional assistance for finding your Danish ancestors, you can book a free planning call. If not, you are still very welcome to follow my blog for tips about Danish genealogy. You can follow me at Facebook or Twitter to keep up with new blog posts on your mobile.