King Frederik VII and the Constitution of Denmark 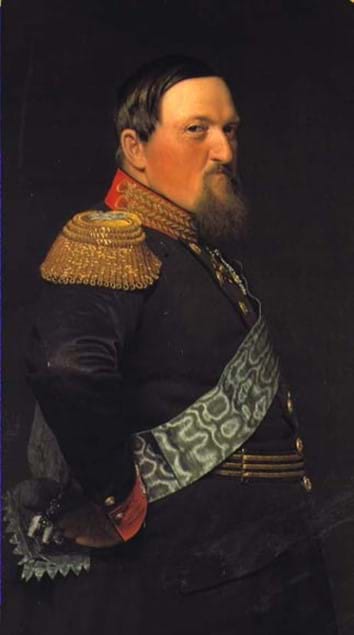 King Frederik VII of Denmark started his reign as an absolute monarch, but less than one-and-a-half year later, on 5 June 1849, absolute monarchy was abolished when Frederik signed the Constitution of Denmark. The constitution granted the Danish people many rights; one of them was the freedom of religion, which had an impact on genealogical research in Denmark.

The Danish Code (Danish: Danske Lov) from 1683 prohibited all other religions than the Lutheran religion. The punishment for practicing other religions was death. The code also required that all children had to be baptized within eight days after the birth. Denmark was divided into hundreds of parishes and inhabitants attended the local church, not a church of their own choice. This means that if you know where your Danish ancestor lived, when he or she was born, you will find the baptism record in the church books for that parish. Until the late 1700s, birth dates were not recorded, because the focus was on the baptism, not the birth. However, most baptisms took place within eight days after the birth, so the birth date and baptism date are almost the same. I have seen only a couple of instances where the parents failed to have their child baptized within eight days, and in those cases the minister wrote the birth date in the baptism record.

The snipped below shows a baptism record from 1692 in Vejby Parish, Børglum Hundred, Hjørring County. The record translates to: "On 3 January Christen Knudsen and Margrete Pedersdtr in Fristrup had a girl to the baptism named: Anne. Godparents: ..." The birth date was not recorded. 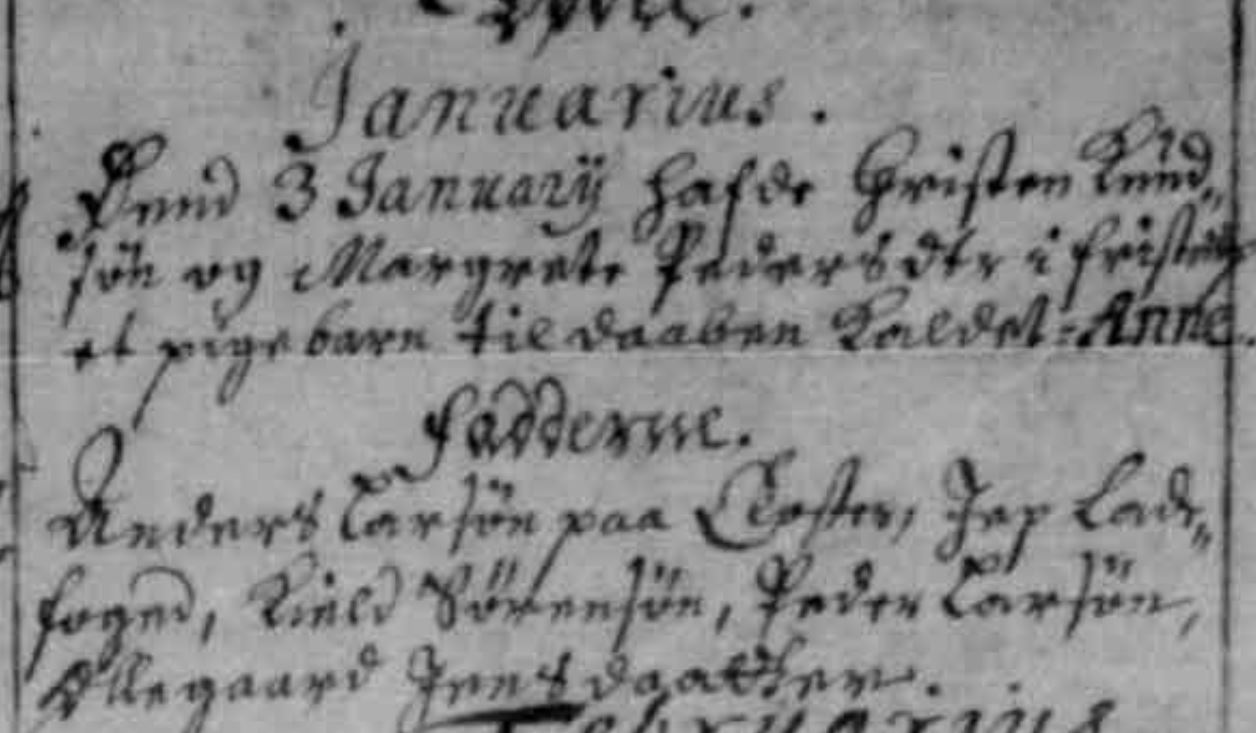 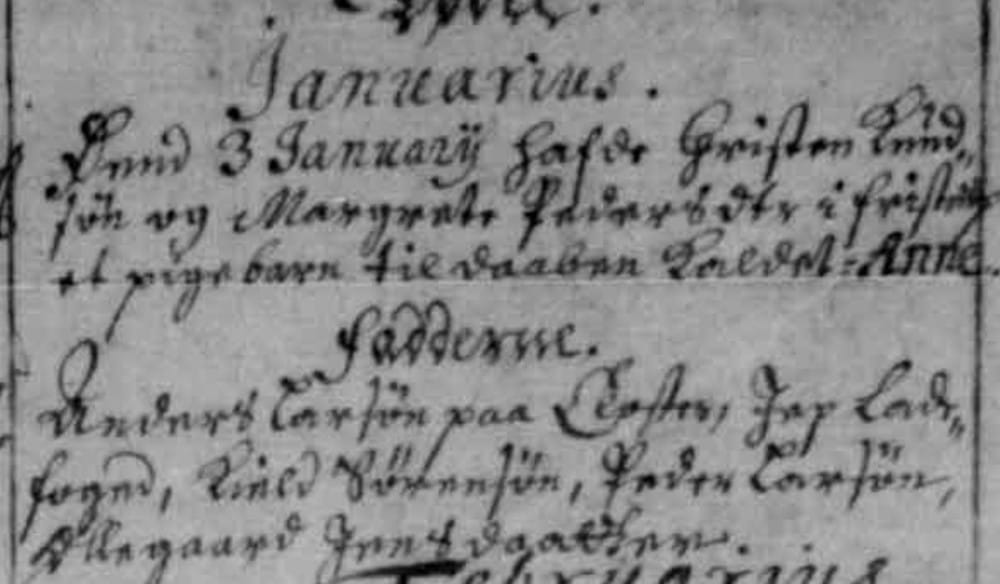 The confirmations listed below took place in Bølling Parish, Bølling Hundred, Ringkøbing County in 1737. Some of the candidates are listed with birth date, others only with their name.

Freedom of Religion from 1849

With the constitution from 1849 baptism and confirmation in the Church of Denmark was no longer required by law, however, all births still had to be recorded in the church books of the Church of Denmark. If a child was baptized into another religion, the place of baptism and the religion were most often recorded in the parish church books making it easy to find the baptism record, which may hold more information. Anyhow, all sources err, so birth entries for children of different denominations may have been forgotten. The 1855 census was the first Danish census to include information about the religion of the inhabitants. If you cannot find your ancestor’s birth in the church books of the local parish, check the census to find the person’s religion.

The two snippets above show two birth records for the same child, Martha Marie Elisabeth Gjede, born 7 April 1885 in Grenå; the top record is from the church book of Grenå Parish, Djurs Nørre Hundred, Randers County and the bottom one is from the Catholic Church, Vor Frue Kirke in Aarhus.

Civil Marriage Allowed for Some People from 1851

The first snippet below shows the birth record for Christen Oluf Marius Christensen, whose parents were "Søren Christensen" and his wife "Anna Hansine Mortensen." Per the birth record, they were married in Boeslunde on 30 April 1881. The second snippet shows part of their marriage record from the church book for Boeslunde Parish.

This overview of some important legislative changes in Denmark shows that knowing a little about contemporary legislation for the area of research can make researching your family history a lot easier. In this specific case, you have learned about some of the available sources and under which jurisdictions you shall find these sources. Regardless of where your ancestors lived, I highly recommend that you read about the history of that area, both national and local. If you have an interest in a specific event or area of Denmark which you would like me to write about, please post a comment or send me an e-mail about it.