Letters: The Wrong Alleged Father of an Illegitimate Child 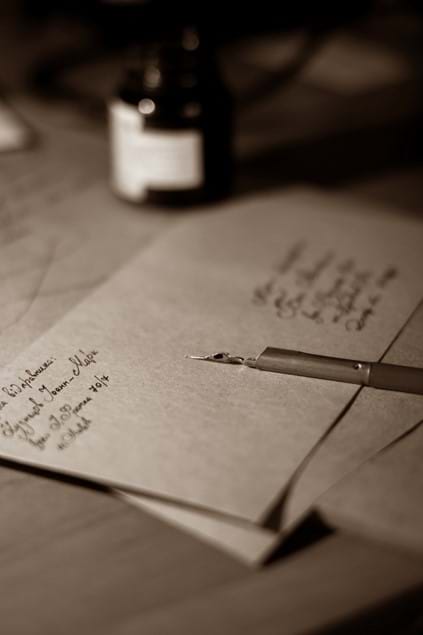 One of the tasks of Danish authorities such as the hundred bailiff and the senior county official was to foresee that the law was followed, so you can find many cases resulting in fines or even imprisonment in their holdings. In this post I give an example of an unwed mother who risked four days in prison for stating a wrong name when asked who the father of her illegitimate child was.

You may not suspect that your Danish ancestor was ever in contact with the bailiff or other authorities, but neighbor disputes are not a modern invention and the bailiff was often involved in such cases. I therefore recommend that you always look at the available records series for the relevant hundred and county. You might be lucky that there is a navneregister or personregister (name or person index) or simply register (index; can be an index of topics rather than names).

Let's have a look at an example. On 25th Sunday after Trinity in 1788, Anne Christensdatter had an illegitimate child baptized in Storarden Church and Parish, Hindsted Hundred, Aalborg County.1 Per the baptism record, she had stated that the father was Claus Jepsen from Skive. Often the alleged father was the father, but you should not take that for granted. Always look for relevant correspondence with the county official when encountering an illegitimate child; not only to get more evidence for the paternity, but also to obtain more information about the alleged father. The starting point when looking for a paternity case, is the journal kept by the county office. In an earlier post, I wrote an introduction to journals kept by Danish authorities.

The index of the journal from the Aalborg county office shows no results for Anne Christensdatter in 1788, but one result in 1789. The reference, 234, is to the case number. The entry in the journal is shown below.2 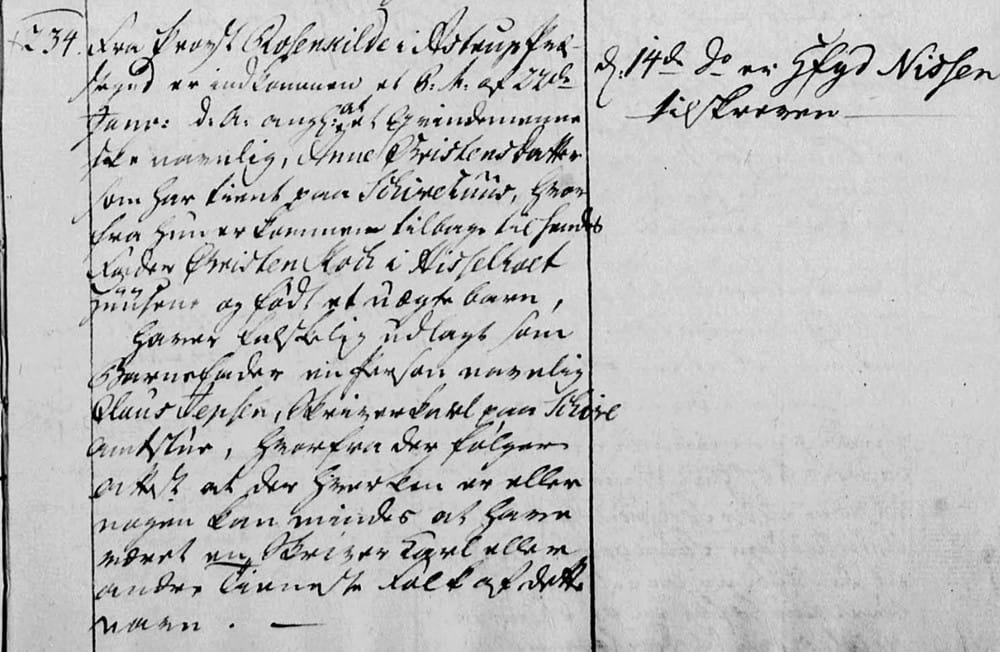 The left column contains a summary of the case and the right column lists the actions taken. The summary says:

From Minister Rosenkilde in Astrup Rectory has arrived a P.M. [promemoria, short summary of a case] dated 22 January this year about a woman named Anne Christens Datter, who has served at Schivehuus wherefrom she came back to her father Christen Kock in Hisselholt Huusene and gave birth to an illegitimate child, having falsely alleged as father of the child a person named Claus Jepsen, scribe at Schivehuus Amtstue, wherefrom is enclosed a report that there is no scribe or other servant by that name and that no one can remember that there has been.

I prefer to read the actual letter rather than a copy or extract. Unless an inbound letter was forwarded, you ought to be able to find the actual letter among the records of that authority. The letter from the minister may have been forwarded, so I continued the search by looking for the outbound letter mentioned in the right column in the journal entry. The county official wrote to hundred bailiff Nissen on 14 March. A copy of that letter was written into the brevkopibog (book of letter copies) kept by the county office.3 The entry says:

14 March.
To Hundred Bailiff Nissen in Siegsgaard.
I received the enclosed promemoria dated 22 January this year from Minister Rosenkilde in Astrup Rectory with an enclosed report from Schive Amtstue dated 22 December 1788 which states that a woman named Anne Christens Datter, who has given birth to an illegitimate child at her father Christen Kock's in Hisselholdt Huusene in Storarden Parish, has falsely alleged as father of the child a person named Claus Jepsen, scribe at the office of Schive Amtstue. Mr. Hundred Bailiff is asked to summon before-mentioned Anne Christens Datter and interrogate her about the right name of the father and what has led her to make the false claim wherefore she must pay a fine of 1 rigsdaler, to be paid to the minister who shall then divide it among the poor inhabitants of Storarden Parish, or in lack thereof ensure that she, when the child is weaned, is imprisoned by the parish bailiff for four days on bread and water, to set an example for others. Thereafter I expect a report of the proceedings.
Aalborg Castle on 14 March 1789. Levetzau.

Based on this it is concluded that both the letter from the minister and the enclosed report from Skivehus Amtstue were forwarded to the hundred bailiff. The research therefore ought to be continued in the records of the hundred bailiff for Hellum-Hindsted Hundred. Unfortunately, the relevant records from that authority have not been digitized.4 Anyhow, this example shows that you may be able to find unexpected information in the records of the county and hundred offices, so looking in those record series is definitely recommended.