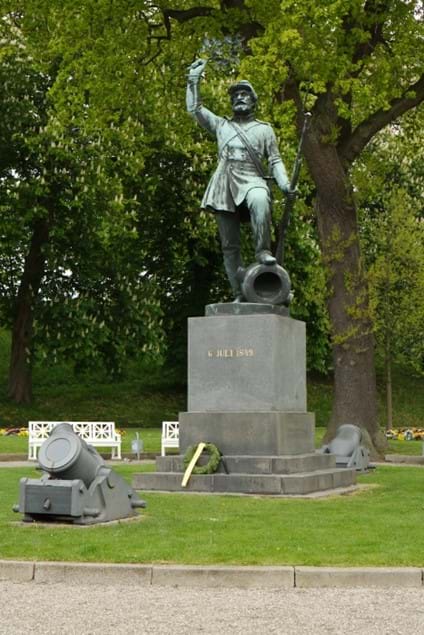 Exactly 169 years ago, on 6 July 1849, about 19,000 Danish soldiers fought against Schleswig-Holstein soldiers at the Battle of Fredericia. Denmark won the battle, but hundred of soldiers were killed or injured. In memory of the battle H. W. Bissen erected the statue shown in the photo above (photographer Villy Fink Isaksen, license CC BY-SA 3.0). The statue is named “Den danske Landsoldat” – the Danish soldier. The Battle of Fredericia was a part of the First Schleswig War of 1848-1850. The Second Schleswig War took place in 1864 and resulted in Denmark losing a large area of land. A part of the area became Danish again in 1920 and that area is now called Southern Jutland. Danish soldiers, who took part in one or both Schleswig Wars could apply for a commemorative medal. The applications have been indexed, so it is relatively easy to search for your Danish ancestors in these records.

Where is the database with the applications for the commemorative medal?

The database is a part of the collection of Rigsarkivet, the Danish National Archives, and can be found by searching the collection of Rigsarkivet. You can search for the name alone, but I would recommend limiting the search to the applications by typing the word “erindringsmedalje” into the search field along with the name of the person you want to find.

As with other sources you need to bear in mind that the indexed records may contain typos, or the name on the original application may have been spelled differently than you expect. For instance, the surname Petersen may also be spelled Pedersen, and although you may have a record for the person saying that his name was Peterson (with an o), his name was most likely spelled Petersen/Pedersen (with an e), because that is the Danish spelling. You can use an asterix as a wildcard for one or more letters at the end of a name.

Beware that the medal wasn’t created until 1875 and that it wasn’t given automatically – one had to apply for it. If you cannot find an application from your relative, he may have died before 1875, or not filed the application or other reasons. One did not have to reside in Denmark to apply for the medal, but many emigrants are likely to have refrained from applying.

Ferdinand Stoltze was one of the soldiers, who fought at the Battle of Fredericia. When he applied for the medal, he lived in Australia. His application also contains the application of Samuel Aron Jacobsen, so it is a bit of a mess. Anyhow, along with the application is a letter written by Samuel in which he states, where he was born, and who his father was. For descendants of Samuel, this record can therefore be very helpful when trying to identify his ancestors.

What to do if you inherited the medal from your ancestor, but cannot find him in the database

Figuring out the spelling of Danish names can be difficult. If you are convinced that your ancestor received the medal, you can look for your ancestor manually. The digitized applications have been sorted by residence for easier access. You can see the digitized records at the website ao.salldata.dk. The type of record is "Erindringsmedaljer 1848-50 og 1864." If your ancestor lived abroad at the time of the application, choose Udlandet (abroad) as Amt (county). As område (area) you must then choose for instance "Amerika I – L" if your ancestor’s surname started with I, J or L.

For some states you will also find lists of those who received the medal. Opening the record for område "Amerika Iowa" will give you a list of those who resided in Iowa, when they applied. The actual applications are not in the record series such as that for Iowa, rather, after the list of recipients, the letters from the King grating the recipient the medal are included – and such records only contain the recipient’s name and residence. Anyhow, if you cannot find your relative in any other way, you may be able to use the state lists to figure out the spelling of the name - and then afterwards look up the application in the series with the correct surname letters. 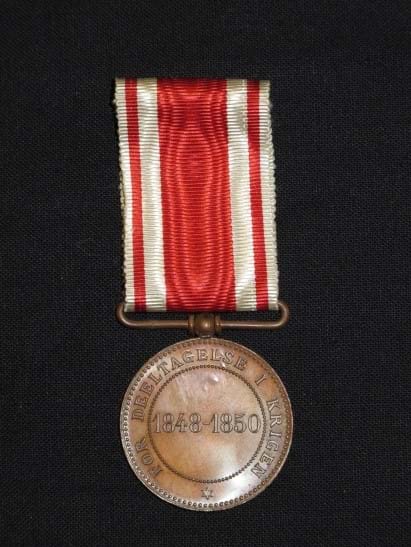 The photo above shows the backside of the commemorative medal for participating in the First Schleswig War in 1848-1850 (per Wikipedia the image is in the public domain).