Denmark has always had a large public administration, so the authorities were involved in many types of cases. To keep track of the documentation, each authority kept a journal of meetings and letters for each case. In this post I will show an example of a journal entry for a paternity case.

In most instances, a paternity case was handled by the authority where the alleged father resided. The county offices usually handled all paternity cases, except for cases in Copenhagen which were handled by Københavns Overpræsidium (the regional authority for Copenhagen Municipality, also called Overpræsidiet). Overpræsidiet kept various journals over the years. For all the journals of Overpræsidiet, there are alphabetical indexes listing the names of both parties, i.e. the mother and the (alleged) father. From 1873 to 1973 paternity cases against men who resided in Copenhagen, were recorded in the journal called an AJ-journal. Below is an entry in the AJ-journal from 1890. 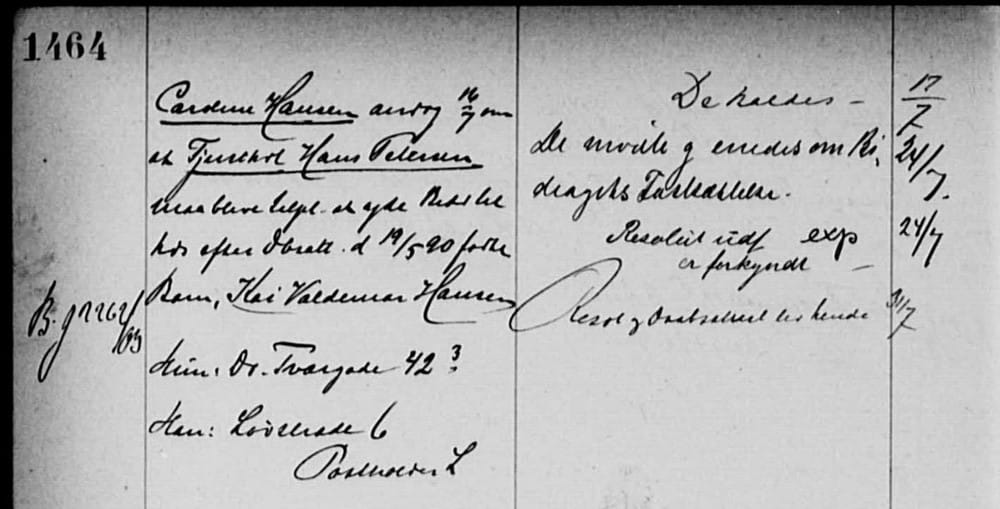 The image shows the entire entry in the journal. Maybe you think a paternity case would be a lot longer and it is. The journal only gives an overview of the case: The meetings, questionings and letters sent and received. The actual case documents are kept in a separate file. Many journals have been digitized, whereas most of the case documents have not been digitized. Before you start thinking that journals are then a waste of time, let us look at the translation of the 1890 entry above:1

Caroline Hansen applies on 16 July for servant Hans Petersen to be obliged to pay child support for her child, Kai Valdemar Hansen, born 19 May 90, per baptism certificate. She: [address] Dr. Tværgade 42,3. He: Løvstræde 6 Mailbox L.

This appears to have been an easy case, because the parents agreed about the support. In the offline case files, I would expect to find the letter from the mother, a summary of the proceedings on 24 July and a copy of the resolution. The note in the margin is a reference to another case, number 2262 in the BJ-journal for 1903. That case probably deals with collection of money from the father; maybe he failed to pay, or the mother applied for additional funds to pay for the child's confirmation.

In many paternity cases, the alleged father denied being the father and then interrogations of both parties took place. Anyhow, the journal entry is still only an overview of the proceedings and the actual case documents have to be seen offline. I deliberately chose an easy case for this post, because this is only meant as an introduction to journals from Danish authorities. I will get back to other case types in later posts.